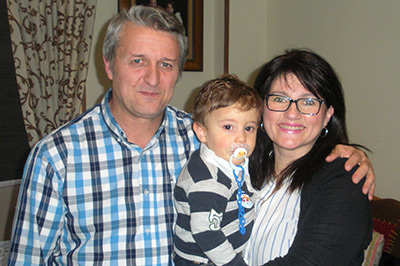 Monserrat Moreno, Spaniard, suffered from a long term degenerative disease of the spinal column. After her last hospital stay the doctors notified her that soon she would need a wheel-chair. On August 15, 2012, in St. Sebastian of Garabandal, she was unexpectedly and completely cured. Her traumatologist could only say "This is physically and scientifically impossible."

This article was originally published on: https://www.garabandal.it/en/

Monsterrat Moreno and her husband, Francisco Santiago, found out about Garabandal through some friends that spoke to them about it. They went there for the first time in 2008. Montse was ill, gravely ill. She suffered from ankylosing spondylitis (a degenerative and incurable condition in the vertebrae) and also from fibromyalgia. However, they weren’t looking for a miracle; they just wanted to rest and pray. Monste’s back problems began in her adolescence, but the final diagnosis took place when she was about 30 years old. Monste hid her pain behind a smile for more than 15 years in her desire to continue serving her family.

Her daily life was difficult. The pain was continuous and it sometimes caused crises that would demand long hospital stays until the doctors could get her pain under control. The doctors had told Francisco very clearly and bluntly, “He told me clearly. He said, ‘You have to know that your wife will never come to the hospital to be cured. She will come so that we can control her pain. You have to realize what type of illness she has, because it is most likely that she will end up in a wheelchair and with a lot of problems.’ We understood that, she more than anyone else.”

In August 2012, Monste and her family went to Garabandal for a few days. It was their eighth visit to the town. They wanted to spend the feast of the Assumption there. On August 15, she went downstairs with her bag of medicine to have breakfast with her husband and children. They were pretty much alone in the hostel’s dining room. Suddenly, Monste heard a voice saying, “You are not going to take any more medicine.” Her pain medicine was as necessary to Monste as breathing, but she decided to do what this mysterious voice told her. When breakfast ended, her husband reminded her, “Take your pills.” Monste answered, “I’m not going to take anything.” Francisco insisted, angry at Monste’s incomprehensible negative reply. Monste was being crazy, and what she was doing would have consequences on the whole family. Francisco explains his anger: “Her crises were horrible. No one could understand what she was doing. She was ill, because she was always ill. She was very limited. I had to get Montse up in the morning, dress her, and take her to the bathroom because she was stiff. If she had to turn over in the middle of the night, she had to call me so that I could do it, because she couldn’t. She had so much pain, so many problems, that I couldn’t understand that she wasn’t going to take her medication. She knew she had to take medication every day.”

After Mass in the town church, Monste suggested to her husband to go up to the Pines. He wasn’t too convinced. The path was really bad, and Monste had not taken her medicine. However, they started to go up the Calleja towards the Pines. “We went up to the Pines little by little, and I felt worse and worse. When we got up to the top I thought I was going to die. I felt pain everywhere.”

Francisco realized that his wife was in pain. He thought that it was a crisis and wanted to bring her down from the Pines immediately to take her to the hospital. She was in so much pain that she was not able to tell him that it was not simply a crisis, but that she felt like she was dying. In spite of her intense pain, Montse did not want to go down by the path. She was adamant on going down the Calleja. Gripping her husband’s arm, she went down slowly and with difficulty the Jormazu’s hillside. When she arrived at the Campuca, the natural area of level ground that opens up in front of the Chapel of the Angel, Monste stopped brusquely. She hardly remembers anything, except her husband’s voice in the background. “I don’t remember anything else, except that I went running down the mountain, running, until I made it to the hostel in 0.2 seconds, as they say.”

Francisco went running after her. He knew that Montse was not capable of running like that. Never, and much less during a crisis. A suspicion arose in his heart: “Could it be a miracle?” He did not want to get his hopes up, but the fact was that Montse was running and he could not catch up to her. Once at the hostel, Montse got into bed and fell asleep instantly. It was the strangest thing in the world; Monste would never lie down during the day, because if she did, her back would get stiff and could not get back up. Her husband knew this better than anybody: “Monste slept very little. She slept at night, because there was nothing else to do, and in the morning she could not get up. I had to get her up little by little. It took hours for her to be able to move.” But Montse had fallen asleep, and slept for over two hours. Francisco sat at her side with one thought on his mind: “I remember sitting there, looking at her and saying, ‘I just want to see how she reacts once she wakes up.’ That is what I wanted to see. Then, she woke up. She stood up, by herself, in one movement. And I said, ‘I don’t need to see more.’”

This happened on August 15, 2012. Since then, Montse has not had any more pain. Yet her story does not finish here. During her next check-up with the traumatologist a year later, the doctor asked, “Monsterrat, how do you feel?” Montse told the truth: she was very well. The doctor insisted, “Do you have any pain?” “No,” Montse responded. The doctor could not explain what was happening. When she compared the tests from that summer with the ones from the previous summer, the facts did not coincide from the MRI’s or the results of a very specific test called HLA-B27. All symptoms of the illness had disappeared. The doctor insisted, “But you have no pain at all?” “None at all,” answered Monste, who did not dare reveal what had happened in Garabandal that summer. “So, the doctor (I have all the records) could not put ‘miracle’ on my record, but put ‘Inactive ankylosing spondylitis and in remission.’ She said (and I repeat her own words), ‘This is materially and scientifically impossible.’ You can feel better or worse at times, but an ‘inactive and in remission’ ankylosing spondylitis? No, obviously not! It is an incurable and degenerative illness. That is why I say that she had to write on the record what I’m saying... The doctor is a very serious woman, and she would not let me leave the appointment, because she just could not understand what was happening to me. I asked her, ‘So, what is it? Am I cured? It doesn’t exist anymore?’ And she said, ‘No!’ and took a highlighter and highlighted where she had written “Inactive ankylosing spondylitis and in remission.’ She gave me the paper and I said, ‘Have a nice day!’ and left. I’ve heard no more about it.”

Montse conserves all of the medical documentation, including that piece of paper on which the doctor expressed her incapacity to explain what happened, emphasizing in green highlighter her incongruent diagnosis: “HLA-B27 + seronegative spondyloarthropathy without activity (in remission).”