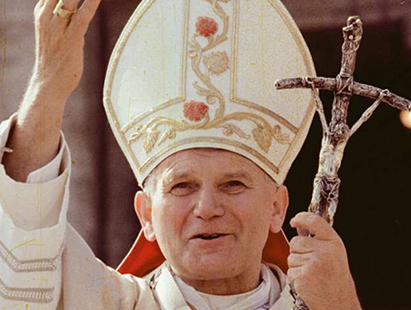 Father José Luis Saavedra, a Doctor in Theology who wrote his thesis precisely on the events of Garabandal, in his book entitled Garabandal, Message of Hope, included an anecdote which speaks about John Paul II’s interest in the apparitions of San Sebastián de Garabandal. Father José Luis correctly pointed  out that this message sent by John Paul II to Albrecht Weber, a famous student of Garabandal, does not imply an approval of any kind, but it does demonstrate the pontiff’s interest in these events.

The doorbell rings.  It is early but Albrecht Weber is already seated at his desk reviewing some papers. The writer gets up wearily and goes to see who it is:

“I bring you a certified letter from the Vatican.  Please sign here.”

Although Weber did not manifest and external sign, he is shaken.  He signs the receipt, takes the letter and walks rather nervously toward his desk. He is used to receiving letters from abroad, especially from Spain, because many of his travels and studies during the past thirty years have been in that country investigating the apparitions of Garabandal. He has published many articles and several books on the subject.  But from the Vatican?  He has never received a letter from there and has no idea what it may be about. He walks hurriedly, even worried, and upon reaching his table he carefully opens the elegant envelope bearing the insignias of the Internal Secretary of the Pontifical Household.  He is more nervous by the minute. Inside there is only one sheet.  It does not have many words, but the German’s eyes jump directly to the end of the page. There he finds some words written in longhand, containing an affectionate greeting and beneath it a name and signature: John Paul II. Albrecht cannot believe what he is seeing. Excitedly, he directs his gaze to the beginning of the text and he begins to read it with full attention, several times, from beginning to end. He is particularly struck by these lines:

“May God reward you for all your work, especially for the deep love with which you are making known the events related to Garabandal. May the message of the Mother of God be received in people’s hearts before it is too late. As an expression of joy and gratitude, the Holy Father wishes to impart his apostolic blessing to you.”

This written testimony, in fact, demonstrates that in addition to Blessed [Saint] Paul VI, another Pope, Saint John Paul II, knew of Garabandal and was positively interested in it. This same pope, after reading Weber’s book Garabandal: Der Zeigfinger Gottes (1992), wished to send a note to the author. The note is brief and without formal pretensions. Nevertheless, it is of great interest as “an expression of joy and gratitude.”

The note, reproduced in the second edition of Weber own book, was drafted by the pope’s personal secretary, Stanislaw Dziwisz, after which the Holy Father adds in his own handwriting at the end a personal greeting and his signature.