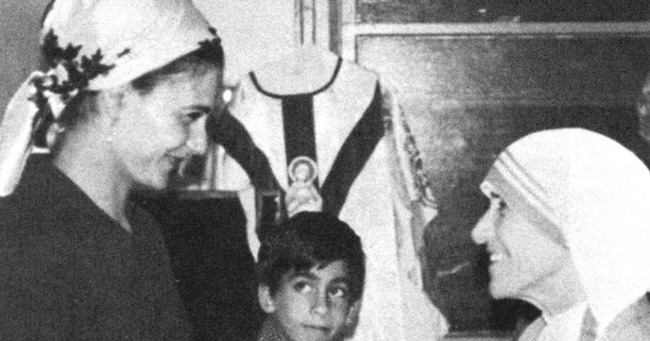 Saint Teresa of Calcutta, Mother Teresa, is without a doubt one of the most beloved saints of the Twentieth Century.  This woman who dedicated her life to satiate Jesus’ thirst and serve Him in the poor also played a role in the history of Garabandal.

To delve further into this topic, we share with you the article that follows which is an extract from the book entitled Garabandal, Message of Hope, the doctoral dissertation of Father José Luis Saavedra, in which certain facts are presented dealing with the relationship between Mother Teresa of Calcutta and the Garabandal phenomena.

It won’t be easy to find another saint whose relationship with Garabandal is as close as that of Saint Pio of  Pietrelcina.  And yet there are other solid testimonies of saints who have manifested a clear and decisive support of these apparitions. Among these the close relationship between Saint Teresa of Calcutta and the Garabandal visionaries stands out, even during the most difficult moments for the phenomena.

Mother Teresa (1910-1997) first learned about the phenomena in 1970, writing later that “From the beginning I felt that the events were authentic.  The Albanian foundress followed the events of Garabandal with interest and personally met three of the visionaries, maintaining a particularly close and prolonged relationship with Conchita.  When the Saint traveled to New York, she would often meet with Conchita who lived there.

Mother Teresa, who was intimately familiar with the events as well as the protagonists, did not hesitate in supporting the apparitions whenever possible during the ecclesiastical process, so much so that her commitment to Garabandal until her death was beyond a doubt.  She counseled Conchita on repeated occasions, leaving in fact a written testimony.  In 1980, Mother Teresa wrote a note to Conchita regarding a question that she should ask the Bishop of Santander regarding the legality of making the messages known.  Mother Teresa thus encouraged Conchita to be totally submissive to the prelate, no matter what he may request. Mother Teresa demanded that Conchita blindly obey the hierarchy, reminding her that obeying the Bishop in all things was the best way of helping the canonical process of the apparitions. Conchita, who had always conducted herself in this manner, faithfully followed the advice of the nun. She presented to the bishop, who at the time was Bishop Del Val, the question that the foundress of the Missionaries of Charity had written in her note, asking for his views regarding the promulgation of these events.  She asked specifically for directions regarding an interview that the British TV station BBC had requested of Conchita on Garabandal.  Bishop Del Val gave his permission, and also asked the seer to send him Mother Teresa’s note.  The note is kept since that time in the archives of the Bishop of Santander as proof of Conchita’s fidelity and obedience toward legitimate Church authority and the involvement and interest of the Saint in Garabandal.