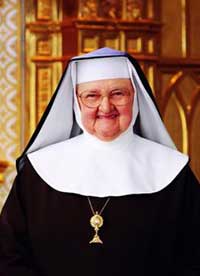 Mother Angelica Live was the talk show presented by Mother Angelica in the TV station that she founded, the worldwide EWTN. In that program that enjoyed a high audience volume, Mother Angelica often offered biblical and catechetical reflections and interviewed guests in her studio and offered the viewing public the possibility of asking questions via the phone.

On several occasions, Mother Angelica spoke on her program about the apparitions of Garabandal, clearly being partial to them. She even stated that on the day of  “the Miracle” announced by the visionaries, EWTN would be in the first row at to record it all.”

Together with this article, we are providing two links to her historic program. In one of them, Mother Angelica converses excitedly with Maria Saraco, who had been invited to share the whole history of the apparitions of Garabandal. Maria Saraco is an American who witnessed the apparitions in Garabandal. She was present during the ecstasy of June 18, 1965 during which Conchita received the Virgin’s second message. Since then and until today, despite her advanced age and poor health, she has been a tireless apostle of Garabandal.