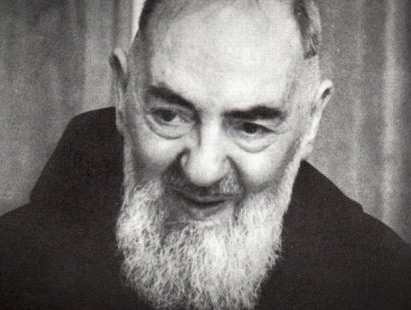 Saint Pio of Pietrelcina is one of the most widely known saints of the XX Century.  His mystical phenomena, the gift of reading of souls and the miracles he wrought moved thousands of people, not only to traverse Italy, but the whole world to find him. Padre Pio believed in the phenomena of Garabandal and corresponded by letter with the seers and personally met with one of them, Conchita González, in his convent of San Giovanni Rotondo. Several spiritual sons and daughters of Padre Pio have indicated that he spoke to them about Garabandal and invited them to learn what was occurring there, assuring them that it was true that the Virgin was appearing there to four girls.

To delve further into this topic, we are providing you with an extract from the book entitled Garabandal, Message of Hope, the doctoral thesis of Father José Luis Saavedra, in which he addresses the special connection between Padre Pio and the phenomena of Garabandal.

In March of 1962 a mysterious letter arrives in Garabandal. It is addressed to the four seers but unsigned. It mentions a supernatural communication received by the sender regarding Garabandal and is written in Italian and dated March 3, 1962. The sender's identity is soon discovered, giving rise to a close bond with the seers who will later on go to visit him. It was from St. Pio of Pietrelcina (1887-1968). Conchita opened the letter, and Félix López, a seminarian from Bilbao who was present, translated it for her.

“Dear girls:  At nine o’clock this morning, the Blessed Virgin told me to tell you:

I send you a copy of the holy Rosary of Fatima that the Virgin has ordered me to send to you.  This Rosary has been dictated by the Blessed Virgin and must be propagated for the salvation of sinners and the preservation of humanity from the worst of the chastisements that the good God is threatening. I give you just one counsel:  pray and encourage prayer, because the world is at the beginning of perdition. They don’t believe in you or in your conversations with the Woman in White…They will believe when it is too late.”

The brief text of the letter contains several references to aspects of the apparitions: the closeness of the Virgin, the importance of prayer…but perhaps the most surprising is the almost literal reiterated response of Our Lady when the girls ask her for proof so that the people will believe. “They will believe,” Our Lady always responded. “They will believe,” the Capuchin now writes, “when it is too late.”

In February of 1975, in an interview for the magazine Needles, currently Garabandal Journal, Conchita talked about her reaction to this letter:

“I was taken aback by what it said, and since it came unsigned, I kept it in my pocket until the next apparition. When our Blessed Mother appeared, I showed her the letter and asked her who it was from. Our Blessed Mother answered that it came from Padre Pio. I did not know at the time who Padre Pio was, and it did not occur to me to inquire further.

After the apparition, we were discussing the letter. Then a seminarian who was there (Félix López) explained to me who Padre Pio was and where he lived. I wrote to him telling him that if he ever visited my country, I would very much like to see him. He answered me with a short letter that said: “Do you think I can climb in and out of chimneys?”  At 12 years of age, I had no idea what a monastery could be.”

“Do you still keep those two letters?”

In February of 1966, Conchita traveled to Rome because Cardinal Ottaviani of the Congregation for the Doctrine of the Faith had invited her. The young woman set out with her mother Aniceta, Luis J. Luna (now the parish priest of Garabandal who had substituted Father Valentín the previous summer), and an illustrious lady, Cecilia of Borbón-Parma, a member of the Carlist royal family and “architect of the journey's eventual success.” In this trip, one of the contacts of the small expedition was Dr. Enrico Medi, friend and personal doctor of Blessed [Saint] Paul VI. Medi suggested taking advantage of their trip to visit San Giovanni Rotondo and see Padre Pio. Conchita was overjoyed at this idea, since she vividly remembered the message that the Capuchin had transmitted to them on behalf of the Virgin: “I promise you that you will be united to me in the glory of Paradise.”

Conchita herself tells the story. “We arrived around nine o’clock at night and we were told that we could not see Padre Pio until the following morning at his 5:00a.m. mass. Before Mass, Father Luna and Professor Medi went to the sacristy. The professor told me afterwards what had happened there. He said that Father Luna had told Padre Pio that the Spanish Princess was there to see him (Cecilia de Borbón- Parma). Padre Pio then told Father Luna: “I don’t feel well and won’t be able to see her until later on today.” Professor Medi then said: “There is another person who also wishes to see you. Conchita wishes to speak with you.” Padre Pio then said: “Conchita from Garabandal? Come at eight o’clock this morning.”

Upon arrival, we were led to a small room, a cell with only a bed, a chair and a small table…I remember that I had the crucifix kissed by Our Lady and I told Padre Pio: “This is the cross kissed by the Blessed Virgin. Would you like to kiss it?” Padre Pio then took the cross of Christ and placed it on the palm of his left hand, over the stigmata. He then took my hand which he placed over the crucifix…He blessed my hand and the cross while he spoke to me.

The young woman was sixteen years old, and between her excitement and nerves, she couldn´t recall what the saint of the stigmata had told her. Nevertheless, there are ample facts to demonstrate the benevolence and love with which the Capuchin viewed the phenomena of Garabandal, something that he will demonstrate on various occasions.

In fact, there are several testimonies from individuals who have been sent to Garabandal by the stigmatized monk of Gargano. Among these is Joachim Boufflet, doctor and philosophy professor at the University of the Sorbonne in Paris and consultant to the Congregation for the Causes of Saints in Rome.  On the afternoon of August 23, 1968, after having gone to confession with Padre Pio in the cloister of the convent of San Giovanni Rotondo, he spoke for a few minutes with him. At the end of the confession, Padre Pio told him: “Pray to the Madonna. Consecrate yourself to the Virgin of Mt. Carmel who appeared in Garabandal.” Boufflet was confused, but Padre Pio insisted: “Consecrate yourself to the Virgin of Mt. Camel who appeared in Garabandal.” Finally, the Frenchman asked him: “The apparitions of Garabandal?  Then, are they true?” To which the Capuchin responded emphatically: “Of course they are true.” By his effusive response, “of course they are true,” Padre Pio demonstrated his appreciation for Garabandal. That is why he encouraged those whom he directed to approach the apparitions.

Other saints have demonstrated their interest in the Garabandal phenomena. But the manner in which Padre Pio involved himself if quite unique. Conchita cites his name in her diary, indicating that according to Our Lady in an apparition, he will see the miracle from wherever he may be. That is why when the Capuchin monk died in 1968 Conchita was perplexed.  Nevertheless, a month after the death of Padre Pio, on October 16, 1968, the young woman received a telegram from Lourdes. The telegram asked her to go there to receive a letter that Padre Pio had left for her. Two Frenchmen who were at Garabandal at the time, Father Alfred Combe and Bernard L’Huillier, offered to take Conchita and her mother to Lourdes. They left that very night. Father Bernardino Cennamo, OFM Cap was waiting for them there. Cennamo explained to the young lady that Father Pellegrino, a priest who took care of Padre Pio in his last years, had transcribed a note for her that had been dictated by the Saint.

Father Cennamo acknowledged that he did not believe in Garabandal at the beginning, but shared with Conchita that when Padre Pio asked him to give her the veil that covered his face after his death, he changed his views. At Lourdes, on that day, “the veil and the letter were delivered to Conchita.” But something else interested her more. And so she immediately asked Father Cennamo: “Why did the Virgin tell me that Padre Pio would see the miracle and he has died?” To which the Capuchin responded: “He saw the miracle before he died. He told me himself.”  That being so, then the saint of the stigmata has entered into a close circle of Garabandal protagonists who, just before their death, have seen the big announced miracle. It links Padre Pio to Garabandal in a much deeper way than having a spiritual interest in its message, having supernaturally seen the miracle, something not even the seers have experienced.