Clara Martínez studied law and subsequently specialized in human resource management. Since 1999 she works with a European operator of telecommunications infrastructure. 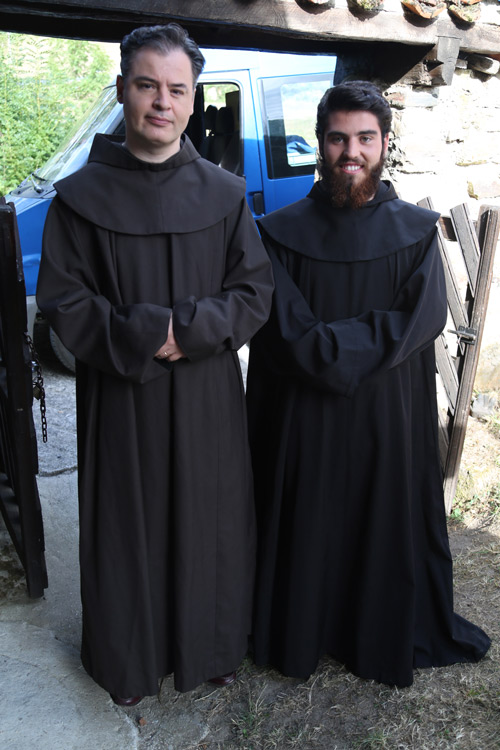 She is married to Juan (at left), who in the movie plays the role of one of the Franciscans. She is the mother of a daughter. During the filming of Garabandal, Only God Knows, she played only a minor role, that of one of the village women in the bowling green scene. However, during the current distribution phase, Clara’s role is very relevant, occupying the job of distribution director of Mater Spei, the producers of the movie. We asked her to talk to us a little, especially regarding the development of the distribution of the movie.

Clara, the first question we would like to ask you is what is Garabandal for you, given that you devote so much of your time and effort to it? We can’t forget that everyone involved in Garabandal, Only God Knows, is a volunteer.
For me, Garabandal is a place where the Virgin Mary chose to manifest herself to her children, a place where she chose to dwell among us during four years. Consequently, to say Garabandal is to say Mary. Also, I can tell you that for me this is a deep personal conviction, inasmuch as during my first day of pilgrimage to the site, on August 16, 2014, I received an increase of faith after telling the Virgin that I opened my heart to her. This is why I have participated in this movie and devoting a lot of time to disseminate these events. Just like Saint Paul became an apostle following his conversion and coming to know the love of God and believing in Him, I also have felt looked upon and loved by Jesus Christ, in my case through the Virgin Mary.

What are your duties as distribution director?
Once the post production phase of the movie transpired, including the legal details, defining the content for the web and launching the trailer, steps in which I was involved in, we entered fully into the distribution phase. In this phase, my duties involve coordinating the work of fifteen persons who staff the various departments covered in this process, including relations with movie houses, marketing and communications media. The team is comprised of wonderful human beings, of great personal value. They all move me on a daily basis when I see their generous commitment. I may add that I love to say that the team is headed by the Virgin Mary who is really the true boss here.
The truth from my viewpoint is that although we lacked previous professional experience in this sector and devoted ourselves as we do as volunteers during our free time, we have managed to grease the complex mechanism of the world of film and moved forward the marvelous apostolate that the Virgin Mary has entrusted to us.

In what way can a person who may be reading this interview and for whom Garabandal is something important help out with the film distribution?
I always say that there are many ways of helping to distribute this film. The first thing to do is to pray. To pray is to help, even though one may feel that one is not accomplishing a lot. I remember that a few days of the pre-screening of the movie, I was told that a lady in Santander had inquired as to the exact time of the event because she wanted to be in prayer at that very moment. I never learned her name, but I am very grateful to her. Truly, prayer has been, is and shall be the cornerstone of this project, and to pray for it is to collaborate intensely with it.

For those who may be more venturesome, there are other more active ways of collaborating. They can talk about the movie, they can disseminate information in social media, they can ask that it be shown in their respective cities via the form that appears on our website, and lastly, to encourage others to go and see the film. And for those who also feel themselves specially called by Our Mother to participate in a more direct manner, we offer in each locale the post of “pilot” and three posts of “co-pilots” for purposes of distribution, marketing and media relations. We endeavor to form a multi-task work team in each city that can reproduce in its respective territory the same structure of the parent structure of our group, becoming our eyes and ears locally.

Since we operate on the basis of showings on demand, basically what we need is for folks to ask for the movie and then help us to distribute it along the various channels previously enumerated.

What did you know about the world of film and their distribution before all of this?
Absolutely nothing! I simply liked movies, that was it. 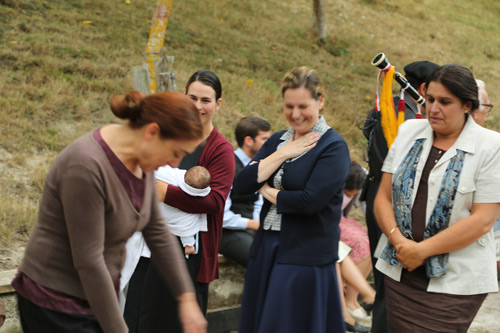 I enjoyed a good movie as one enjoys a good book. But I had never participated in the filming or distribution of a movie. What is curious is that the day when they decided who was to be in charge of the project, while they explained the details of what the job entailed, I felt a sort of pinch in my heart, a direct call to take on that job. I did not share this with anyone. Moments later, however, my appointment was announced.
This comes to show that God chooses the weak to confound the strong, and he does not choose those who are prepared but prepares those whom he has chosen. There is no difficult undertaking if we allow ourselves to be led by the Blessed Virgin. From the very start of the project, it was very clear to us that this film was hers and that we were merely her administrators. During all of this time I have come to appreciate the Virgin Mary’s maternal care when we responded with confidence. The secret is to be close to her so that we can understand well what she expects of us.

What has been your current experience? What things have impressed you the most?
There have been many things that have impressed me during these two years of work. During the months that we dedicated to the postproduction, I saw the hand of the Virgin Mary in the persons who had been designed to hold important posts, inasmuch as they seemed to be especially inspired as they carried out their duties. Subsequently, during the legalization phase, I felt Mary’s presence as the Untier of Knots, because I faced numerous problems, yet they were all resolved seemingly by themselves.
Also, the day we launched the trailer, we had worked for many long hours without taking a break prior to the release, and came to realize that Our Lady was in haste to manifest herself to her children. The video took a life of its own and began to take off without there being any way of controlling this! When we opened the web page, we had a fantastic welcome, and shortly thereafter we were contacted by individuals whom we did not know in a multitude of countries around the globe, offering their disinterested services to help spread the word about the movie. Moreover, something incredible happened after having interacted with them shortly thereafter. I had the sense that I had known each of them for a long time, and I do not believe I am mistaken when I say that I am making lifelong friends with all of them. The only explanation I can find for this is the fact that when two people share the same beliefs, this unites them. The language of the love of God is the only universal vehicle for all of us to understand each other, irrespective of the language we may speak.

I do not cease thanking the Lord for having allowed me to work in this project and I ask Our Mother to allow this movie to transmit her blessing.