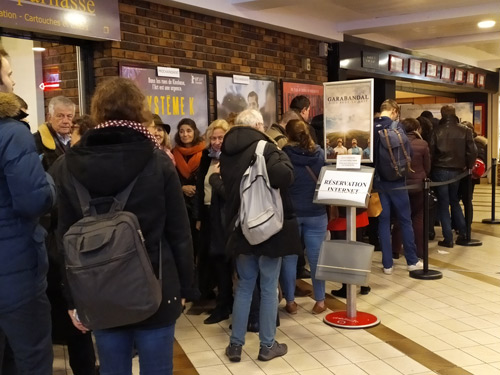 Paris, January 9, 2020. The pre-screening for the movie Garabandal, Only God Knows was scheduled for 7:30p.m. There was a transportation strike in Paris.  Neither the metro nor the buses operated and we had the logical fear that people could not be able to attend. But when the time came, the Cinema Les 7 Parnassiens was practically full.  There were more than 170 spectators, among these journalists, correspondents, heads of Catholic movements, and priests, among others. Those present were enthusiastic and sensitive to the messages of the Virgin. After the movie, the audience remained to witness the discussion that followed, in the presence of Brian Jackson, the film’s artistic producer, and Father José Luis Saavedra, a theologian and expert on the Garabandal apparitions.

As of today, SAJE Distribution has programmed 24 premieres of Garabandal, Only God Knows in France, beginning on January 22.  Further information regarding the showing of the first movie of the apparitions of Garabandal in France, Belgium, Switzerland and Canada can be obtained at the following link (in French).

May Our Heavenly Mother bless all of you.