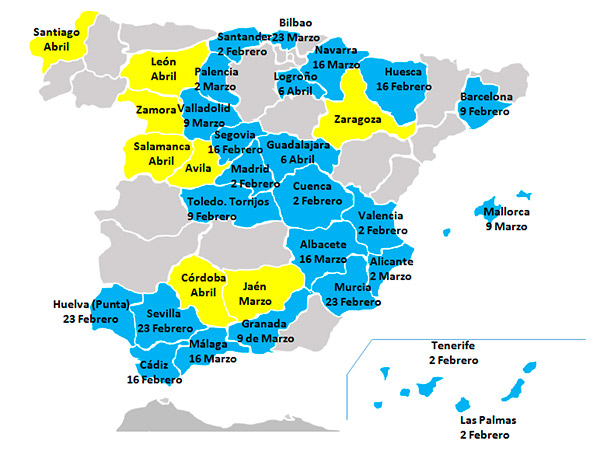 Seeing these results, Mater Spei AIE knows that it has no credit. We have neither a great producer nor distributor. We could not offer a renowned cast nor did we have a budget for advertising. The lure, or magnet, are the very events that took place in San Sebastián de Garabandal from June 18, 1961 until November 13, 1965, when four girls affirmed having first seen St. Michael the Archangel and later Our Lady of Mt. Carmel.

Looking at the map attached, you can see how Our Blessed Mother’s blue mantle extends over Spain as it comes out in theaters or dates of showing are confirmed in various cities. The provinces in yellow are where we have contacts, and where, with Mary’s blessing, we hope to specify premiere dates shortly. In May, it will be shown in Latin America, and the steps to be able to show it in theaters in the United States, Canada, Ireland and Great Britain are being taken.

In each city there is a team of local volunteers who make the premiere possible. We call them our pilots, and they are a key part of the movie’s distribution. They are so important that if in a city we do not have a pilot assisted by three co-pilots in marketing, distribution, and press, we would not dare to move a finger. Without a budget for advertising, the pilots are the ones who, through their generous work, make up for what other movies do through posters, billboards, and commercials.

We will keep you up to date on the distribution development of this movie that shows what happened in Garabandal like the eyewitnesses saw it, yet without anticipating the Church’s judgment at any moment. The Catholic Church does not consider Garabandal a closed case. Rather, on several occasions the local hierarchy has affirmed that the message and spiritual recommendations the girls supposedly received concord with Church doctrine.

May Our Blessed Mother make this movie transmit her blessing.