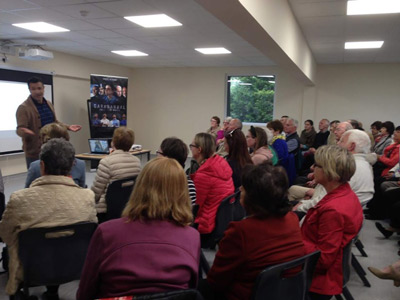 Garabandal, Only God Knows premiered in Northern Ireland in the presence of Juan Romero, actor who plays the role of Fr. Ramón Andreu.  Juan arrived on Wednesday, May 15 at the Dublin airport and didn’t waste any time. He gave his first talk that same night in the Church of Our Lady of Victories  in Sallynoggin, Co. Dublin. The next day he gave another talk in which he presented the facts about what took place in Garabandal. Between the messages and stories about what took place during the apparitions, he gave a wonderful catechesis about the importance of the sacraments and fidelity to Church doctrine. Even though the Mater Spei team had only two days to organize the talk, more than 80 people were present with standing-room only.

When the long-awaited day finally arrived, Juan Romero crossed all of Ireland to get to Derry and be present for the screenings on Friday the 17th and Saturday the 18th of May. On both days he gave an introductory talk in the theater before screening the movie and then took questions afterwards. The Bishop of Derry, Most Reverend Donal, honoured us with his presence at the premiere on Friday night. 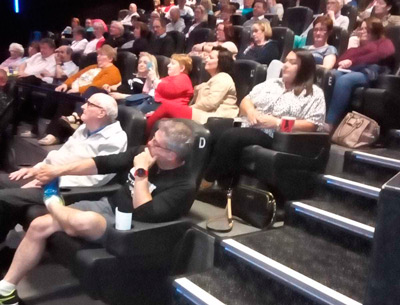 Juan Romero returned to Spain on the morning of the 19th. That afternoon, Garabandal, Only God Knows was well received by the public as it premiered in Cookstown, Co. Tyrone. Even though there were only five screenings between the two cities, more than 650 people filled the theaters to hear more about the messages of Garabandal and to receive Our Lady’s blessing. Both theaters will be screening the movie again:
In Derry on Sunday, May 26 at 7pm
Link to buy tickets

In Cookstown on June 9 at 6:30pm
Link to buy tickets

We give thanks to Our Blessed Mother for the many blessings that she has poured out during these days. We hope that this is only the beginning of the movie’s journey through the land of St. Patrick!!