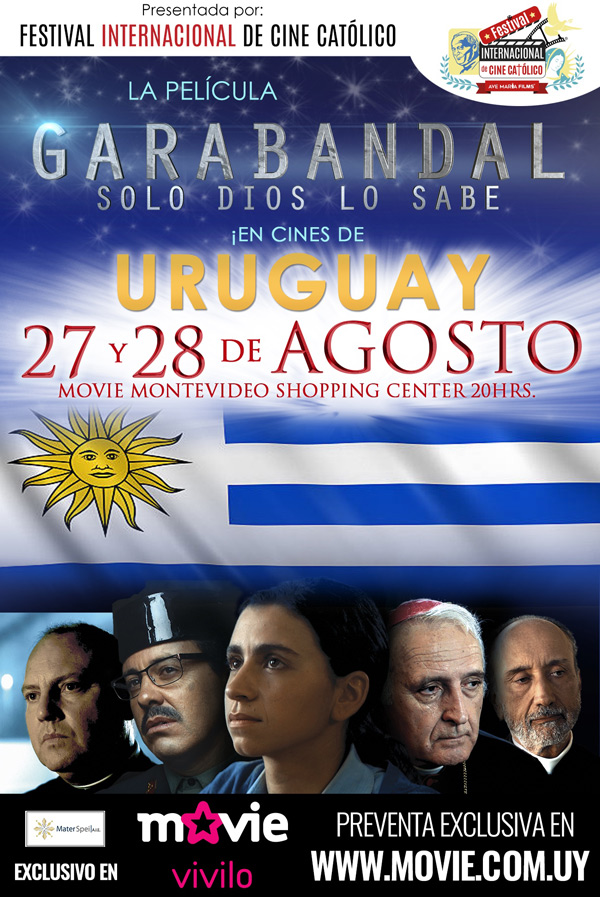 As we previously announced, Garabandal, Only God Knows, will premiere in Uruguay at the Movie Montevideo Shopping Center at 8:00p.m. August 27 and 28, 2019.

Garabandal, Only God Knows, is the first full length film whose subject matter is the reported apparitions of the Virgin Mary at San Sebastián de Garabandal in Spain. These apparitions have a strong link to an important event in the history of Uruguay, known as the Miracle of the Andes.

We have little to add which you do not already know regarding this journey. On October 13, 1972, the airplane in which the members of the Old Christians rugby team, together with family and friends, left Montevideo in route to Santiago, Chile and crashed at 4.500 meters in the Andes mountain range. The authorities thought the passengers had died and gave up the search a week later. Sixteen survivors were rescued on December 22, 1972, after 72 endless days during which they saw family members and best friends die, and the survivors had to eat the flesh of those who had died.

Faith and friendship were the strength that sustained the survivors in very difficult circumstances, with temperatures that reached thirty degrees below zero and death was just a heartbeat away. But these youngsters had a strong ally in the Virgin of Garabandal.  Their mothers prayed to her, asking for a miracle so that they would be found alive.

Eduardo Strauch Urioste recently confirmed this fact in his book Out of the Silence, indicating that his mother and many others, among them China Herrán de Bordaberry, first lady of Uruguay at the time, prayed for those who had been lost to the Virgin of Garabandal. In fact, his mother Sara Urioste wrote: “A group of mothers placed all of our hope in the Virgin Mary who had appeared in Garabandal, and we recovered our sons alive.”

If you wish to know the true story of the apparitions of the Virgin Mary in San Sebastián de Garabandal, don’t miss this film which was made possible by 300 volunteers who wished that the important messages of Our Mother at Garabandal be made known. The film has already premiered in 18 countries around the world.

On June 18 1961, in San Sebastián de Garabandal, a small village in the north of Spain, four girls, Conchita, Jacinta, Mari Loli and Mari Cruz, claim that St. Michael the Archangel had appeared to them. Days later, on July 2, 1961, they received a visit of Our Lady of Mt. Carmel. Following that apparition, there would be more than 2,000 other encounters with the Celestial Lady. The parish priest, Don Valentín and the brigadier of the Civil Guard, Don Juan Álvarez Seco, suddenly found themselves implicates as protagonists in happenings that overwhelmed them as they tried to understand where the truth resided, while dealing with a perplexed Church hierarchy and a throng of persons that increased as they descended on the village in search of answers.

If you want to see Garabandal, Only God Knows, but it has not arrived in your city, please fill out the form and request that the film is shown in your city.

We will do everything possible to ensure that the movie is shown in a movie theater close by so that not only you, but your family and friends can also benefit from the showing. We are witnesses to the immense good that this film is generating and we cannot be still. Souls need to listen to the voice of Our Blessed Mother who tries to guide them to conversion, to Jesus Christ and to heaven.

For further information on Garabandal, Only God Knows, you can visit its official web site.

We ask that you print out the movie poster and post it in a visible location, in addition to forwarding this release so that the information can reach as many people as possible.

Mother, grant that this movie transmits your blessing.