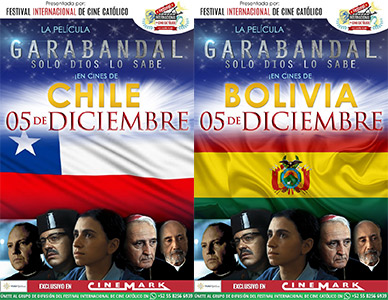 We would like confirm that the premiere of the movie Garabandal, Only God Knows, will be on December 5, 2019. This is the first movie for the big screen whose subject matter is the apparitions of the Virgin Mary in Garabandal, Spain.

In Bolivia the movie will also be shown at Cinemark:
- Cinemark Ventura Mall. Cuarto Anillo San Martin, Ventura Mall Second Floor.  Calle Rosa Carmín, Santa Cruz de la Sierra, Bolivia.
What is the movie about?  Have a look at the trailer and its synopsis:

June 18, 1961. In a small village in Northern Spain, San Sebastián de Garabandal, four girls, Conchita, Jacinta, Mari Loli, and Mari Cruz, claim that St. Michael the Archangel has just appeared to them. A few days later, on July 2, 1961 they receive a visit from Our Lady of Mount Carmel. After this first encounter, there are more than two thousand visits from this heavenly Lady. The village’s parish priest, Fr. Valentín, and the Civil Guard brigadier, Mr. Juan Álvarez Seco, suddenly become protagonists in an overwhelming event. They must struggle to find where the truth lies, while confronting a perplexed hierarchy and facing an ever growing multitude of people who arrive at the village in the search of answers.

In one of the messages, there is a phrase that has proven to be prophetic: “Many cardinals, many bishops and many priests are on the road to perdition and are taking many souls with them.”  Who could have ever imagined such a thing at the time? This begs the question:  What would have happened if we had listened to Our Mother? Certainly many things would have evolved differently. But we still have time to listen to Our Mother who is concerned about our salvation. Garabandal, Only God Knows converts the viewer into a witness of what occurred at Garabandal and allows him or her to listen once more to these important messages.

Pray for the project so that much good is obtained by the souls that see the movie. Please circulate the request form that the movie Garabandal, Only God Knows be shown in more cities.

If you wish to know more about the apparitions of the Virgin of Garabandal, we are providing you with a talk, in Spanish, given by Father José Luis Saavedra who developed the script for the movie. He has a doctorate from the University of Navarre based on his thesis on the current state of the apparitions that occurred at San Sebastián de Garabandal.  Father Saavedra has developed the most thorough historical and theological study to date on Garabandal. The talk was given on February 11, 2018 at the Church of St. Thomas the Apostle and St. Phillip Neri in Valencia, Spain.

May Our Mother bless you!!  We will continue bringing you up to date.