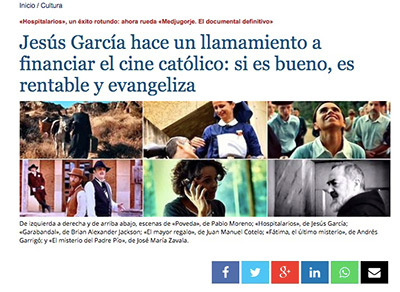 Jesús García, journalist, and writer and director of the film Hospitalarios, published an article in Religión en Libertad in which he issued a call for the financing of Catholic films, because as he stated, “we can leave our children a better culture than the one others want to leave them. But for that we have to do it ourselves.”

In his article, he pointed out the success of the premiere of the movie Garabandal, Only God Knows, noting the following:

“In 2018, Garabandal [Only God Knows], an independently produced Spanish film premiered, collecting more than 200,000 euros and was seen by 33,000 movie viewers.Its director is an American priest, whose primary occupation obviously is not film-making.  In fact, this was his first, and for the time being, his only film. The entire production relied on amateurs, including all of the actors down to the servers in the cafes.  At present, Garabandal continues its triumphant journey throughout Latin America, no small feat for a movie that should not have cost more than 40,000 euros.  To give you two examples, its 33,000 moviegoers would not fit in the Celta Stadium in Vigo nor in the one in Valladolid.

You can read the entire article (in Spanish) by clicking here.