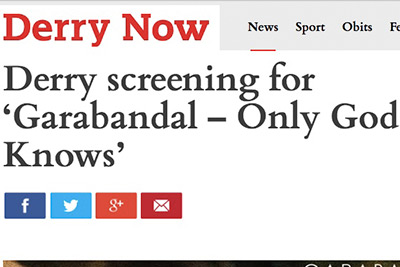 Derry Now, a newspaper in Northern Ireland that specializes in news related to the city of Derry and surrounding county, announced to its readers on May 17, 2019 the premiere of Garabandal, Only God Knows.

In fact, the film on the apparitions of San Sebastián de Garabandal premiered in Ireland that very night.  Participating in the Derry premiere was Juan Romero, one of the actors in the film, who introduced the film and the events of Garabandal to the viewers.  Bishop Donal, the Bishop of Derry, was a guest of honour at the premiere.

You can read the complete article in the following link.