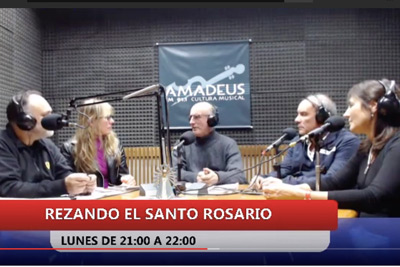 Radio Amadeus has been talking about Garabandal, Only God Knows to its more than 130,000 radio listeners since the beginning of the campaign in Argentina.

On May 10, 2019, with the movie already showing in Argentina, Radio Amadeus interviewed Julio Pose who has the distinction of being the first to have spoken about Garabandal in Argentina, as well as Rafael Samino, one of the actors of Garabandal, Only God Knows. Julio Pose described Garabandal, Only God Knows as “an intelligent film that is very well presented.  It relies on testimonies.  Everything that is told in the movie is done so because there are witnesses.  The movie is historical, based on verifiable facts.”

You can watch the interview here